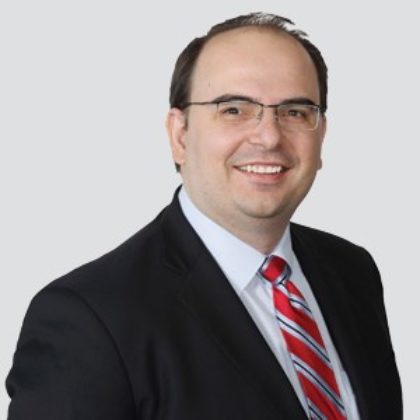 GEORGE PALIKARAS
PRESIDENT AND CEO
George is a Deep Tech Entrepreneur and the founding CEO of Metamaterial Inc. (META), a publicly listed smart materials and photonics company, with the mission to change the way we use, interact and benefit from light and other forms of energy. Over the past 10 years he has forged partnerships with Fortune 500 companies, enabling META to develop and lead disruptive technologies in aerospace, medical, automotive, cleantech and consumer electronics industries. His passion for technology and entrepreneurship resulted being named 2018 ‘Endeavor Entrepreneur’, 2017 ‘40 under 40’ by Fortune Magazine (Greece), ‘Emerging Entrepreneur of the Year’ by Ernst and Young (Canada). Under his leadership META has received numerous prestigious industry awards including the 2019 ‘Global Cleantech 100’. The start-ups he has led have developed strong IP portfolios with over 150 patents, completed two M&A and raised more than $75M in funding. Prior to META, George founded MediWise  Ltd. a research and development medtech company based in London, UK. George has received Executive Education at Harvard, INSEAD, UCL and Stanford Business Schools. He earned his BEng. in Computer Engineering, an MSc. in Digital Communication Systems and did his PhD studies in Metamaterial science with over 40 journal publications. He is a named inventor in 30 patents. Prior to becoming an entrepreneur, George worked as a researcher at Queen Mary University in London in wearable and implantable sensors development. He also worked in industry at Wireless Technology Laboratories (former Nortel Networks) working with a team of engineers and managers through contract bidding and technology development for large telecommunication OEMs in excess of $30m.
< Back
COMPANY
InvestorsProductsTechnologyAbout UsContact Us
OTHER
Privacy PolicyISO 9001 CertificationLegal NoticeProduct SupportSitemapTerms of Use